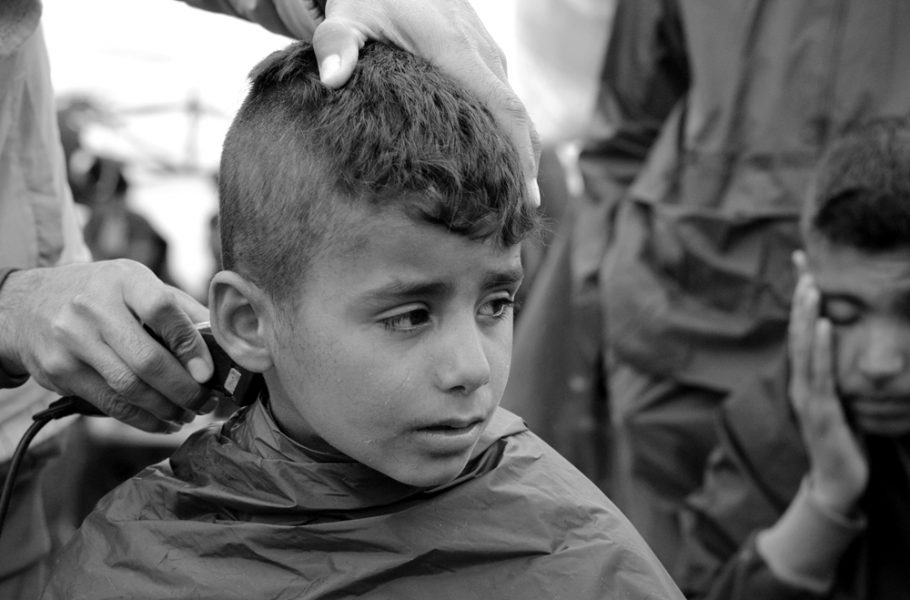 Idomeni is a tiny Greek village nearby the border with the Former Yugoslav Republic of Macedonia (FYROM), barely travelled because of the tense relations between both countries until 2015. Since almost a year, Idomeni is also the biggest improvised refugee camp in Europe. More than 15.000 people live in precarious tents close by the railroad tracks or on the mud.

It’s 10 o’clock in the morning and Yasmine walks along a tortuous road which ends in a mudded track pierced by dozens of streams. The rubbish, leftovers and abandoned stuff on the way rest on both side of the path. Yasmine and her family, who left Alepo (Syria) and arrived in Greece just few weeks ago, were part of the group that tried to cross the border between Greece and FYROM on Monday (14th of March), after going through the turby waters of a river. Yasmine, over-loaded with all her belongings, walks exhausted by her older son and her husband. Few meters ahead, her little daughter stumbles while holding her grandma’s hand. They all return now to the camp in Idomeni, after spending the night soaked and freezing in the mountains.

A local road, 70 kilometres away from Thessaloniki, runs through dozens of hectares of sown land that reach the horizon. The path is sprinkled of gas stations in which car parks have become random refugee camps. Hundreds of tents plie up nearby the gas pumps or even in the car washes. UNHRC, the UN agency for refugees, tries to maintain the camps in decent conditions for those people, if there is any possible way to do so. For months, buses arrived daily to these stations bringing thousands of people from Athens who successfully crossed the border. Hundreds of migrants fleeing the mud in Idomeni have been waiting here for weeks for the border to be open again. That’s why the iconic pictures of enormous groups of people marching in lines along the road are no longer repeated, although people is still arriving. Some of them don’t know that the Former Yugoslav Republic of Macedonia has closed the entrance, some others prefer staying as close as possible just in case.

THOSE WHO STAY, THOSE WHO LEAVE 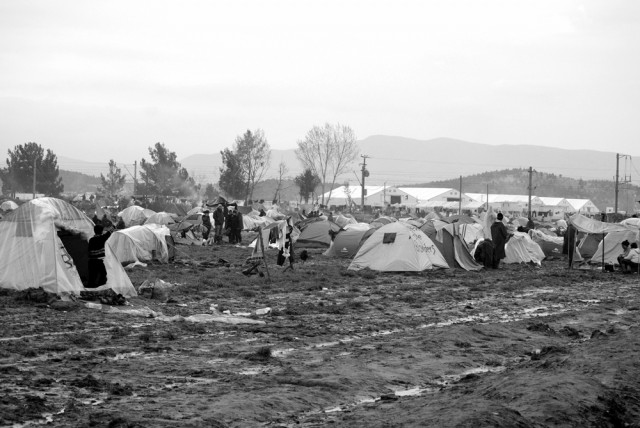 Thousands of tents, squashed by the weight of the water over the ceilings, form the camp along the border between Greece and the Former Yugoslav Republic of Macedonia, in the muddy, cold and dirty land. The sun has not come out in Idomeni for a while. A light but incessant rain falls over the tents again and again. The columns of smoke raise over the horizon. The inhabitants of the camp crowd around the fires in the morning, trying to get warm. Some NGOs such as Doctor Without Borders or Save the Children and hundreds of volunteers try to ensure the health and hygiene minimum conditions and take care of the food supplies as well. However, resources are lacking, possibilities are limited and needs are growing.

Suddenly the rain has given a break to the inhabitants of Idomeni after weeks of floods, although the mud is everywhere. Kids go out and play, adults have a walk. The good mood, the bustle and life are back at the camp but asylum seekers are hopeless.

Yasser’s older child is 8 years old. He has his face covered by freckles and a huge smile crowned by a separated incisives. Yasser is Syrian and arrived in Greece with his wife, his son and his little daughter just few days ago. He is dentist, his wife make-up artist and they only dream about Germany or Sweden while waiting in Idomeni for the border to open. They only dream about a place where their children can live safe and healthy. That’s all that matters. They complain about the lack of information and alternatives and don’t know whether to go back to Athens or try to cross the border again. For the time being, they stay, wait, and still have faith.

Also, Ibris, who is yazidi, one of the most persecuted ethnicities in Iraq, has been since a couple of weeks in the camp with his mum, brothers and sisters. His father is already waiting for them in Germany. They don’t consider trying to illegaly cross the border. Nor Anwar does, expulsed after reaching Slovenia. They all sleep in a small tent together. It has capacity for two or three people. They are seven. Most of them are just teenagers but they travel with a group of kids. “If they don’t open the border, many will return to Iraq” despite the risk, explains Anwar, “this doesn’t worth to be called life”, he stands.

Most of the refugees are tired of the unbearable situation in Idomeni, some of them have decided to leave. It’s three o’clock in the afternoon and a group of people crowd around a bus at the entrance of the camp. Dozens of asylum seekers take the few belongings they have left after a long journey and place them on the bus’s boot. The adults rest already inside while the children play outside the vehicle. Around 50 people give up and go back to Athens where they don’t even know what they will find.

Kassim holds a baby not older than few months in his arms. He come from Bagdad but, exhausted because of the terrible state of Idomeni, he has decided to return to Athens. Zana is leaving as well, even though he arrived just few days ago: “We are all waiting for Europe to decide”, explains, but in the meantime, “it doesn’t worth to live this way”. The health and hygiene conditions in the camp are simply a disaster to what you must add the difficulties of sleeping under the rain every day floating in the mud. However, Zana still trusts the European Union because, he insists, “they believe in human rights”.

Mayki is the bus driver. He offers a private service: 25 euros per ticket to travel back to Athens. Mayki drives the bus back and forth around 1 to 3 times per day, depending on the demand. He recognises that in the past few days, the more and more refugees voluntarily make the choice to abandon the camp. And even like that, people are still arriving in Idomeni every day.

The situation’s standstill has given rise to the establishment of small trade in the camp. Little shops like Asis’, a Syrian asylum seeker who is running out of money, and sells tomatoes, olives, eggs and lamps and lighters in the same place. Sheida, an Iraqi whose face is pierced by dozens of wrinkles, also has a small business in which he offers cigarettes. There are also a couple of hair salons in Idomeni. A pile of boxes works as a hairdresser’s chair in the establishment run by Mohammed, Amyad y Mayid, three Syrian barbers. A razor, a blade and a lot of dedication are enough to manage a barbershop located by the main road of the camp. And the business works: a bunch of people wait forming a queue to get a haircut for around 5 euros.

FROM FIGHTING AGAINST ISIS IN MOSUL TO THE MUD IN IDOMENI 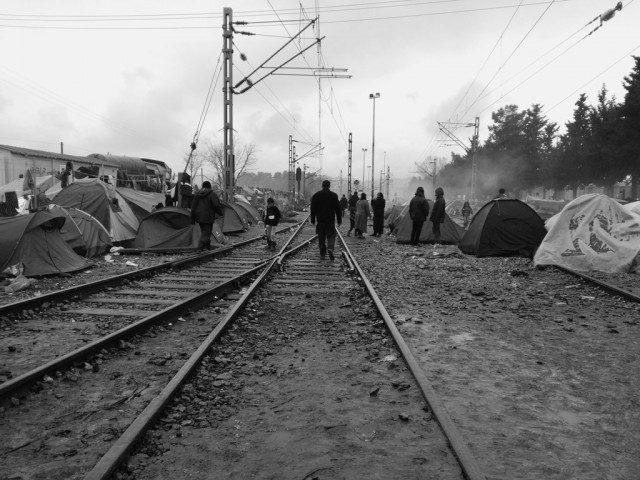 A man walks along the railway in the refugees camp of Idomeni (Greece). / B. R.

‘Peshmerga’ means «those who sacrifice their lives» but it’s also the name of the independent army of the Iraqi Kurdistan, the hard line in the fight against the Islamic State in the area. Agrin (fictitious name) knows well what is like to look into the eyes of death. For months, he fought in a narrow trench in Mosul from where he combated the terrorists of ISIS. Due to the lack of a proper salary and the rising insecurity, Agrin sat the course to Europe with his children and wife. Now, he waits in Idomeni for the border to be open.

Agrin is around 40 years old and has been soldier for over 10. He is a strong man, with solid shoulders, strong features, weather-beaten hands because of the use of weapons and the eyes full of bags. Agrin has a trustful smile and the look hard and lost. He observes the fire while shaking a piece of carton to rekindle the flames of the campfire in which he is warming up the tea. He proudly reveals his appurtenance to the Peshmerga army and shows in his phone pictures of the bunkers in which he has been battling the Islamic State in Mosul. Surrounded with mortars, he poses with his weapon and admits to have killed dozens of terrorists. “During the day, the confrontation take place not more than 200 meters away from each other. During the night, this distance is reduced to 100”, Agrin explains. But the price to be paid for fighting against ISIS is too high, so high that he wasn’t willing to pay it anymore. He could sacrifices his life, but not his family’s.

Agrin, his wife and his four kids between three and thirteen years old live in a couple of tents located by the railway. In a terrace built with a plastic roof and some wood sticks the family get warm around the fire. Ahmad, Agrin’s neighbour, is sixteen years old kid spealking fluent English. He has become his family’s voice. Ahdmad, his father, mother and brother also left the Iraqui Kurdistan running away from a direct threat of ISIS supporters in the region. Fadhil, Ahdmad’s father, sold everything he had to pay the cost of the trip to Europe for the whole family. Now, in Idomeni, they live side by side with a former fighter against Daesh.

Ahmad is happy today, his mum is going to cook his favourite meal, a stew of chicken and rice. It has been a while since the last time he ate it. Probably, the time that passed since they all left Iraq.

Yasmine, Yasser, Ibris, Anwar, Agrin, Asis, Ahmad, Mohammed, Amyad y Mayid, Ibris… Those are just few names, several stories behind the figure of more than 15.000 people surviving in Idomeni, waiting for an answer, a solution, a way out.

This article is a compilation of three reports published originaly in Spanish by cuartopoder.es in March 2016. 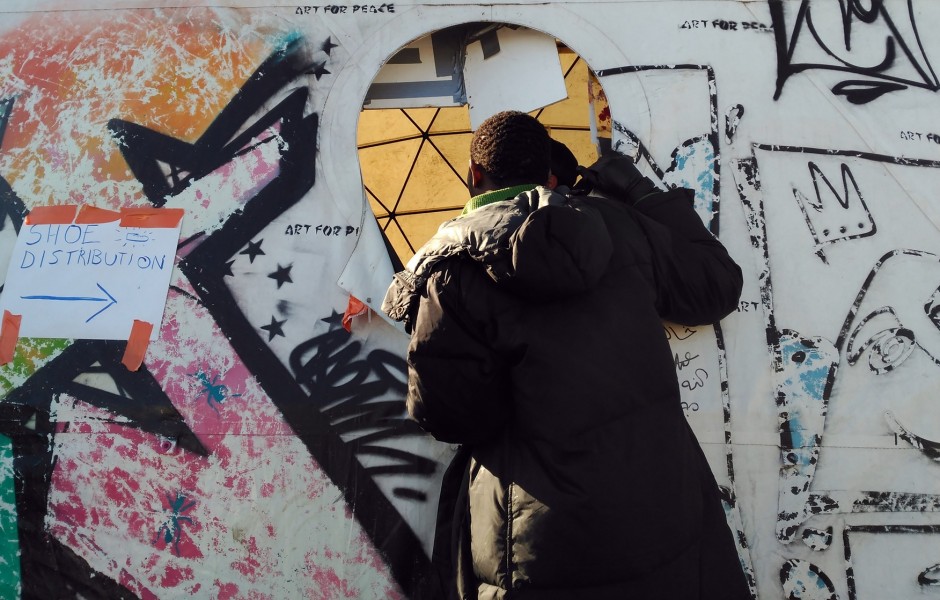 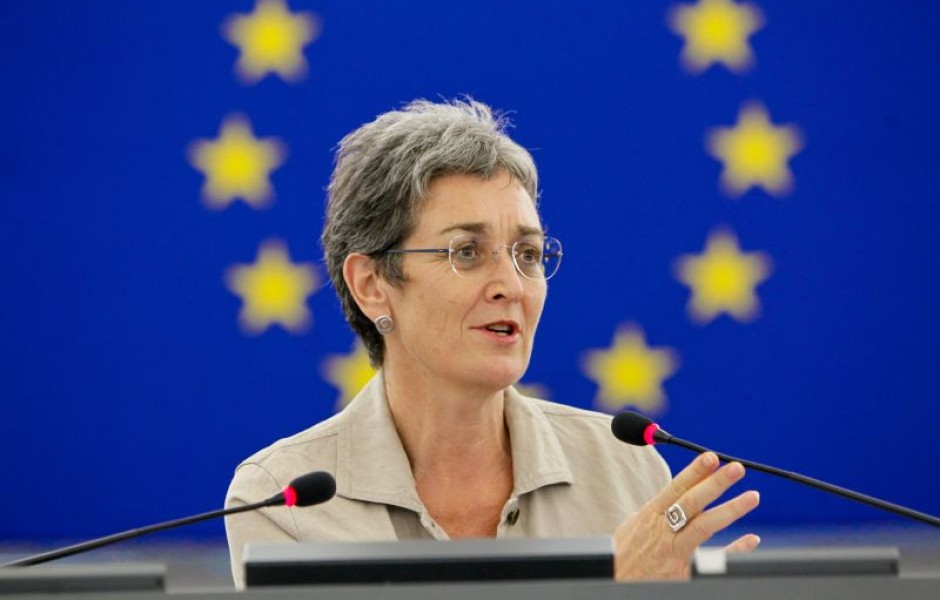 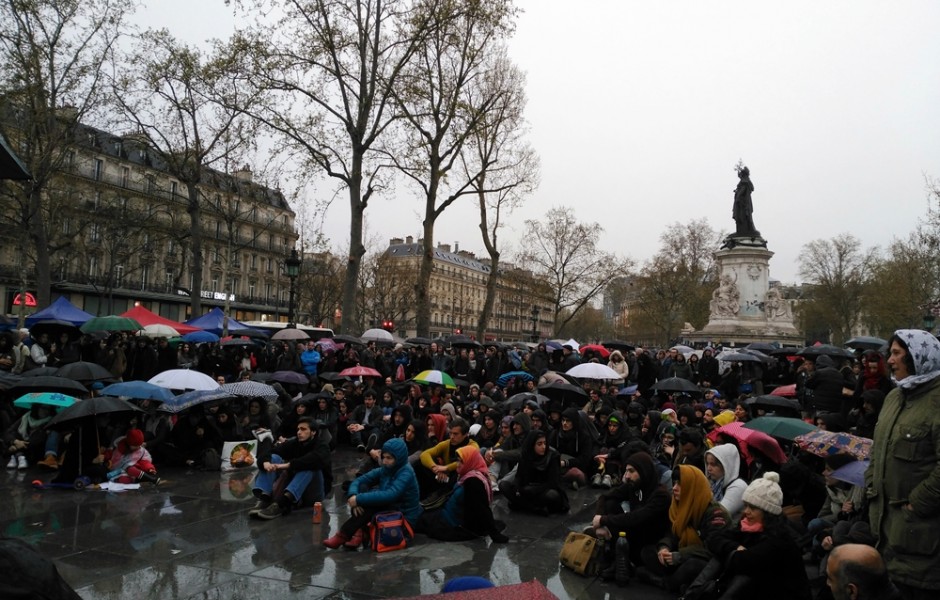 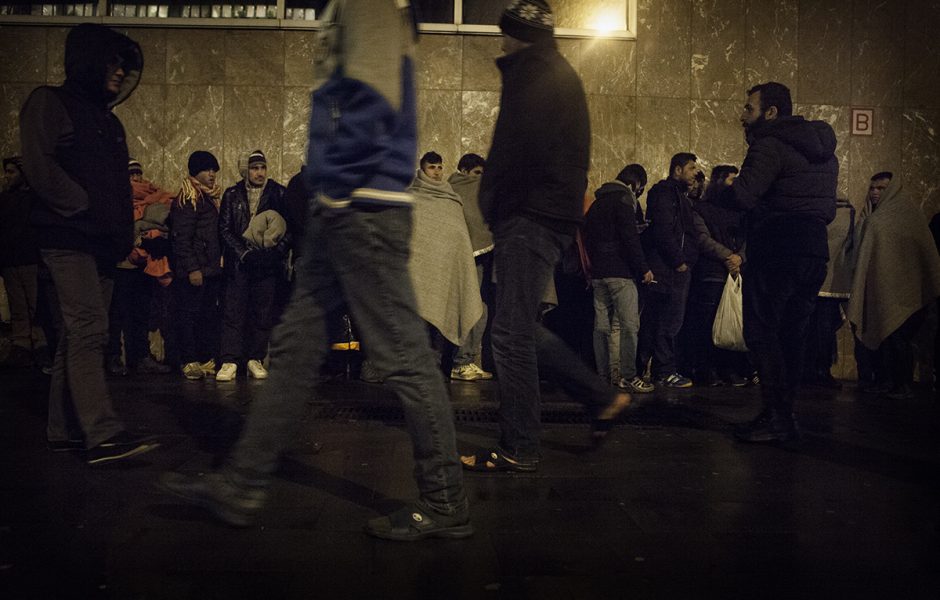 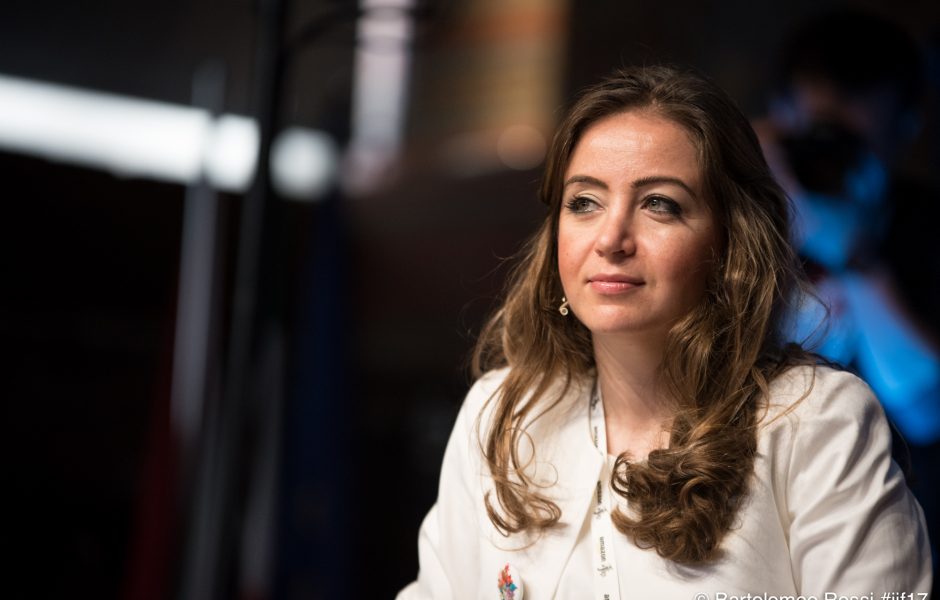